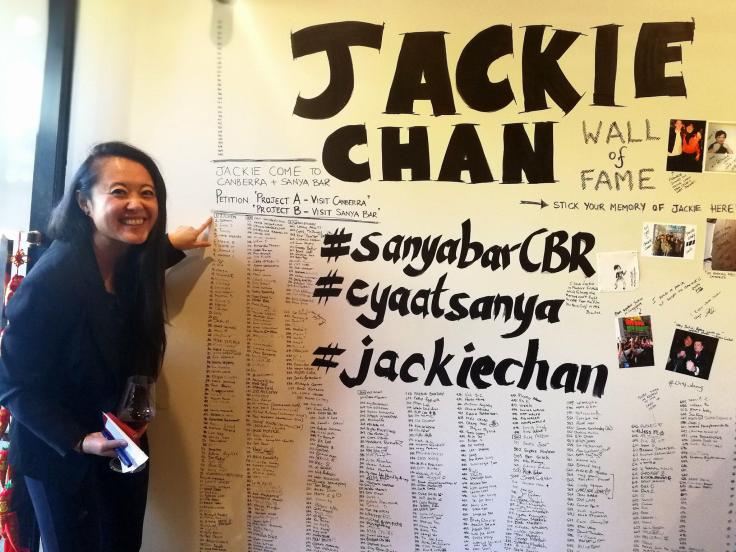 JJ Chen, owner and entrepreneur at Sanya Bar, has launched a campaign to bring Hollywood martial arts star Jackie Chan to Canberra. Or should I say, back to Canberra.

Jackie Chan is a Canberran.  Yep.  That national capital that most dismiss as boring has produced a martial arts king. 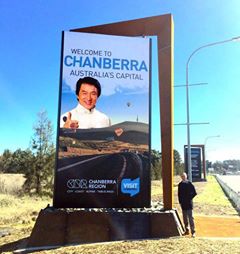 Chan’s parents, Charles and Lee-Lee, migrated to Canberra when he was seven. They worked as a cook and housekeeper at the US Embassy in Canberra.  Jackie stayed in Hong Kong, but he reunited with them when he was 17.  His father later went onto run the Ruby Restaurant at Dickson, which at the time had the reputation of being the best (and most expensive) Chinese restaurant at Canberra. It was a favourite venue used by the Chinese Embassy for banquets when it wanted to impress.

There are rumours that Jackie attended Dickson College (where he is listed as an alumnus).  There is also a rumour that he got the name ‘Jackie’ while working as a labourer in Canberra – his workmates couldn’t pronounce his Chinese name so thus ‘Jackie’. He will just have to come back to Canberra so that he can tell us all exactly where he was and when he was.

JJ is larger than life, an effervescent Chinese-Australian with Beijing roots and connections.  Her mother, a former Chief Financial Officer in China, migrated the family out in the 1980s and ended up becoming a cook to former Prime Minister Bob Hawke.  JJ has her mother’s tenacity, and she also has a presence that goes unmatched.  She also has a good understanding of the quirky – witness her fabulous ‘京’ tinis (Capital cocktails), liberal use of 白酒, and fusion bar snacks with a difference.

Walk into her Lonsdale St bar and the first thing you notice is the artwork – big, modern, bold and busty murals with a People’s Liberation Army theme.  These were commissioned by renowned Chinese-Australian artist Guo Jian (also a good friend of hers).  I was privileged to attend the opening last year, where he attended and signed in person.  But now, JJ has her sights set on someone even more famous than Guo Jian.

A whole wall in JJ’s restaurant is devoted to Jackie Chan.  First, there is the TV screen showing clips from some of his quirkier early movies.  Always the comedian, they are fun to watch even without sound.

Next to the TV is a whole wall of fame devoted to signatures, a petition aimed at convincing Jackie Chan to return. Of course I signed – I am number 676.  ACT Chief Minister, Andrew Barr, also signed (he is number 767).  And the petition has the support of Commonwealth Games Gymnastics Gold Medallist Chris Remkes.

Now JJ needs your help to get as many signatures as possible to help get Jackie Chan back out here.  Next time you are in Lonsdale St, stop by and lend your support by signing the petition.  And while you are there, stop to try her fabulous Duck Bao or some of her signature cocktails.

Jackie Chan – where are you? My kids just LOVE the Spy Next Door and they think you are really cool. You also inspired, in part, my love of Chinese culture and my interest in learning the language.  We want to see you back in Canberra so please hurry up and come soon!

Suitable for: A drink with friends to chat about the meaning of life; a really cool first date.